BVS Industrie-Elektronik GmbH, one of the leading international providers for the maintenance of industrial electronics and automation technology, celebrates its 35-year anniversary. Founded in 1987 by managing director and owner Emil Bätz, the Hanau-based company has grown into an industry global player with over 200 employees. With a versatile range of services offered, BVS helps companies in the production and processing trade to maximise the operating life and the productivity of their machinery and to ensure the safety of machine operators.

“Quality makes the difference” is the motto that embodies the promise of high quality found in every process at BVS. Under the multi-generational lead of Emil, Florian and Yasemin Bätz, BVS accelerates its continued internationalisation and taps into promising new business fields - most recently, the electronics product range was successfully expanded to include renewable energies.

BVS is a part of a sustainable circular economy
Emil Bätz saw the huge potential in the maintenance sector early on – when BVS Industrie-Elektronik was founded in 1987, the repair of industrial electronics was a major gap in Europe’s market. The business model is totally ingenious from an ecological standpoint, and an important contribution to sustainable resource conservation. Supply situations and availabilities are now proving tense around the globe once again. Extending the operating life of a plant while simultaneously giving production companies the advantages of maximised productivity, lower risk of failure and thus cost savings is BVS’s approach to sustainability. In doing so, Hanau’s hidden champion shows that economy and ecology aren’t mutual contradictions, but can in fact be mutually dependent.

The company that started with four employees now employs over 200 workers today, and is one of Europe’s leading providers with over 10,000 satisfied customers around the globe. Its expertise encompasses the entire field of CNC, PLC and robotic automation technology. What makes it special – BVS offers repair, distribution and other services not only for current modules, but also for those that are discontinued.

“Our focus lies clearly on preventing failures in our customers’ machinery and minimising machine downtime. To this end, we perform complete product overhauls; instead of just replacing faulty components, we integrally and preventively refit electronic modules. This saves the customer money and ensures long-term machine availability. And in the event of an unexpected failure, our highly qualified team is active 24/7, 365 days a year, so that we can respond as fast as possible and assist the customer. We consider ourselves a service provider for active investment protection, and thus a partner for strategic, proactive obsolescence management”, explains Florian Bätz, managing director of BVS Industrie-Elektronik GmbH.

The quality and expertise that BVS has systematically pursued for decades has resulted in cooperation with four major control and drive manufacturers, including the Bosch Rexroth Group, for which BVS acts as a service point as the only company in the industry worldwide. Furthermore, we hold Service Partner status for SEW-EURODRIVE and are a designated Distribution Performance Partner for the manufacturer Lenze.

Sustainable growth without limits
With an impressive history behind us, we can also look ahead to a highly promising future with enormous potential for growth.

Yasemin Bätz: “Our aim is to create more market shares beyond national borders. With our headquarters in the heart of Europe, near Frankfurt am Main – we have the perfect conditions for creating international long-term growth. We also want to tap into new business fields and expand our portfolio, the way we recently did successfully with photovoltaics inverters in the area of renewable energy. We're driven by constant innovation, economic dynamism and technological progress.”

BVS is an owner-run, medium-sized company that highly values human capital. We believe that the growth we’re striving for, the technological and economic advancement of the company, is only possible when we work together as a team. The company recently went on an aggressive recruiting campaign in the Rhine-Main metropolis for this purpose as “Hanau’s sustainable employer”, touting the many benefits it has to offer as an international mid-size company in an emerging market – a local base with a global reach. The promising prospectives in BVS’s sustainable environment were quickly clear to potential employees – the idea of “repairing instead of throwing away” is more prevalent now than ever before.

About BVS Industrie-Elektronik GmbH
Since 1987, the company BVS Industrie-Elektronik GmbH has offered its customers repair, distribution and other services for current and discontinued CNC, PLC and robotic automation technology from the manufacturers SIEMENS, FANUC, BOSCH REXROTH/INDRAMAT, KUKA, ABB, SEW, LENZE, HELLER and HEIDENHAIN as well as its own HMI/IPC solutions under the UNIPO® brand. Its portfolio also covers electronics for renewable energies, photovoltaic inverters in particular.

With over 100,000 replacement and spare part modules stored at our site in Hanau, Germany, and more than 200 employees who provide services to over 10,000 satisfied customers from practically all producing and processing sectors, BVS is one of Europe's leading service providers in its market segment. In addition, the company is certified to DIN EN ISO 9001:2015 and DIN EN ISO 14001:2015. When it comes to product overhaul repairs we work strictly according to the currently valid Machinery Directive 2006/42/EC and customers receive at least an 24-month warranty on the complete range of products and services.

Availability and speed are essential in the event of a production standstill caused by machine failure. As part of its free 24/7 emergency service, BVS Industrie-Elektronik delivers exchange, replacement and new parts to its customers 365 days a year.

This is why the motto of BVS Industrie-Elektronik is Quality makes the difference! 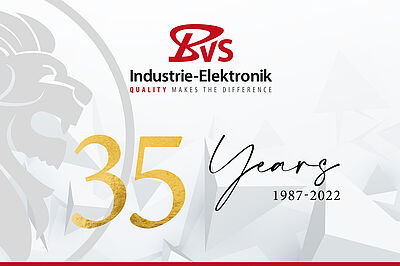